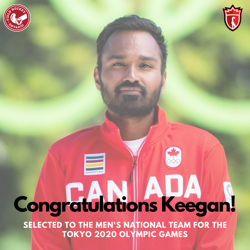 Field Hockey Ontario is proud to congratulate one of Ontario's own, Keegan Pereira, on being named to the team!

Please join us in congratulating Keegan and sending him good luck wishes as he heads to Tokyo! Be sure to follow Field Hockey Canada and the Men's National Team on your social media platforms to stay up to date as the team begins their Olympic trip!

You can learn more about the Men's National Team Roster on Field Hockey Canada's Website at http://www.fieldhockey.ca/2021/06/28/field-hockey-canada-announces-mens-olympic-roster/

The Olympic men’s field hockey competition will take place July 24 to August 5 (Day 1 to Day 13) at the Oi Hockey Stadium.