Where are they now? Series: Julie Nelson 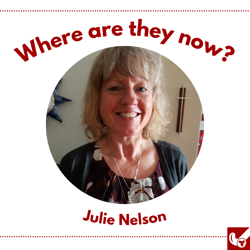 Field Hockey Ontario is happy to share the eighth of many posts in our new series of content titled "Where are they now?" This series will highlight alumni from FHO, their playing, coaching, and umpiring careers, and what they are doing now. We are happy to introduce our ninth individual, Julie Nelson.

Please enjoy this write-up on Julie's Field Hockey experience and what she does in the present, as written by Julie herself.

I started playing in Grade 10 in Victoria.  I moved to Ottawa in January 1988 and, in the Spring of 1988, I saw an ad in the local paper advertising a women's field hockey league for the Outaouais Field Hockey Club; I have been a proud member ever since.   Outaouais is proudly celebrating its 50th Anniversary this year and I have been busy collecting pictures, memories, and emails of previous members.

As a player, especially in my 20s, every weekend from April – October was usually spent playing in a tournament from Ottawa, Toronto, Montreal, North Jersey, Washington DC, Halifax, New York City, etc.  Oh, the fun we had, the places we got to see, and the friendships that were made.

I took my first umpire course from Janet Beverly and she, Suzzanne Nicholson, Mary Cicinelli, Denys Cooper, and Trevor Martin mentored me along the way.  I umpired many years for the local high school league, the OUA (university), and Field Hockey Canada's national tournaments.  So then, it felt like most weekends from April-November were spent umpiring.  I got to umpire in Saskatoon, Vancouver, Charlottetown, Brandon, Halifax, Ottawa, Toronto, Montreal, Washington DC, London, St. Catharines, Breslau, Exeter, Kingston, Kitchener/Waterloo, and many more.

I eventually obtained a Canadian rating and facilitated many courses and assessed many in the hopes of sharing my knowledge and trying to get more umpires certified.  My involvement with the Field Hockey Canada (FHC) Technical Committee (TC) was working on the umpiring courses and exams.

I like helping and being involved.  So, that is why I was the Ottawa Rep for Field Hockey Ontario (FHO) for many years in the 90s, was a member of the FHC TC, an FHC and an FHO Board Member, as well as being on the Executive of the Outaouais Field Hockey Club for 25 out of 32 years.

Field hockey, and the friendships I have made, were a great comfort to me when I had thyroid cancer in 1997 and melanoma in 2008 and 2017.  Field hockey helped me when I was dealing with my  Mom's battle with Multiple Myeloma from 2001-2003.  I severely sprained one ankle in 2009 and the other in 2013.  I pulled one hamstring in 2010 and the other in 2015 - so it was time for me to slow down.  I have always said that I will continue to play field hockey until I can't and I am thankful that I can still play recreationally with Outaouais.

I have worked for the Canada Revenue Agency since 1988 and I am about to retire.

Thank you, Julie, for sharing your experience with the FHO Community. Now you know where Julie is now!

Where are they now? Series: Julie Nelson

Please enjoy a number of photos of Julie over the years in various roles at various events!