Where are they now? Series: Danny Linehan 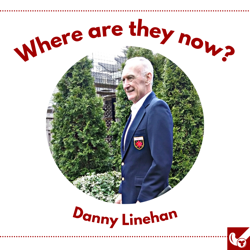 Field Hockey Ontario is happy to share the eighth of many posts in our new series of content titled "Where are they now?" This series will highlight alumni from FHO, their playing, coaching, and umpiring careers, and what they are doing now. We are happy to introduce our eighth individual, Danny Linehan.

Please enjoy this write-up on Danny's Field Hockey experience and what he does in the present, as written by Danny himself.

In March 2021, my former high school science teacher in England, Mr. Cliff Wyatt, celebrated his 100th birthday and I was happy to send a special birthday gift to him. Mr. Wyatt was also the school field hockey coach who suggested to me, about 65 years ago, that I should add field hockey to my activities. Sporting activities, in addition to good grades, he said, would help when applying for a position at University.

That is how my field hockey career began and I have been fortunate to play in many different places around the globe, and meet wonderful people, many of whom I am still in contact with today.  Certainly, great memories came from this experience and, even more important, were the great friendships that this sport nurtures.

I was captain of a very good high school team as evidenced by the fact that three of the team went on to become international players. I, then, went to the University of Birmingham and enjoyed many great times both on and off the field, and was captain of the Varsity team for 2 years.

After University, I worked for several years as a research biochemist and played for Harborne Hockey Club, one of several prestigious teams in the Birmingham area. There were five international players on that team, not the least of whom was Paul Fishwick, the Great Britain Olympic goalkeeper.

When I emigrated from England to Canada in 1966 and settled in Toronto, I did not bring any equipment with me because I did not know that the game was played in Canada. However, I saw a photo of the late Alan Raphael with the Rangers Field Hockey team in the local newspaper. In contacting Alan, he recommended me to the Ookpiks team which I joined in 1967 and played on the team for many years, many as the captain. An Ookpik is a mythical Inuit snowy owl and some of our team were pretty mythical at times.

The Ookpiks had a cast of characters as well as being very good players. Some of them included:

In those days, the league games were played at Sunnybrook Park and it was always a busy Saturday afternoon as game after game was played on the pitches.  Then, of course, it was off to a pub or a party to develop and cement the good fortune of friendships.

There were several other tournaments held each year in addition to the league.  The Maple Leaf tournament was the biggest. It was held on the grounds of the Oakville private school, Appleby College, and was always well attended by not only local teams, but also teams from different provinces and the USA.

I was fortunate to play on the Ontario team for 10 years from 1967 onwards and was captain for a number of years.  It was always great fun to go with the Provincial team to the National Championships where I would reconnect with other friends whom I had not been seen since the previous year’s Championship.

In 1972, after 5 years in Canada, I became eligible to apply for Canadian citizenship. With citizenship in hand, I was then picked to play for the national team and had a number of international tours over the next four years, playing with and making friends with many great people.

During this period, I was also Vice-President of Sales for a food company in Toronto that had $50 million in sales per year. So, it was definitively a busy time in my life as I juggled a very time-consuming job with field hockey practice and games with either the Ookpiks, Ontario, or Canada.

After my playing days were over, my involvement with field hockey changed to a managerial role.  I was asked to form a committee to bring an international indoor tournament to Canada, and I was happy to do so. On the committee, of course, were the same guys that I had played with who were also putting back into the game, and thus The Chapman and Kay International Indoor Tournament began, later to become the Canadian Holidays Tournament.

Following that success, I was then asked to be Manager of the Canadian Indoor team and had an enjoyable 3 years in that role watching the new young players, like Pat Burrows, Ajay Dube, and Robbie Edamura develop into world-class athletes under the guidance of the very fine coach, Jim MacDougall.  The highlight of that period was the Canadian team finishing 3rd at the 1991 World Indoor Championships in Glasgow, Scotland.

An interesting aspect of that Glasgow tournament was that, while I was manager of the Canadian team, Dick Clarke was the coach of the England indoor team.  Dick had attended my high school about 5 years after me and had the same hockey coach. What a coincidence and what a stunning endorsement of Mr. Cliff Wyatt, my old high school science teacher and hockey coach, who started it all.

After that period, I retired from field hockey and concentrated on running my own business for a while until retiring from that. I have played golf for many years and so decided to take a course and became an accredited golf teaching professional. This new profession was one which I thoroughly enjoyed and did it for 10 years.  And it is now golf that keeps me busy and allows my competitive juices to flow, while keeping me relatively fit by playing and walking 4 games a week. I live in Mississauga, Ontario, and keep in contact with many former teammates.

Thank you, Danny, for sharing your experience with the FHO Community. Now you know where Danny is now!

Where are they now? Series: Danny Linehan

Photo 1 is from Danny's 1961 high school team and Mr. Cliff Wyatt is to my immediate left. Photo 2 is the 1964 University of Birmingham team and Tony Hull is seated extreme left of photo. Photo 3 is with the Canadian team in Malaysia and Danny is the tallest in that photo 2nd from the left, front row. Photo 4 is April 2021, wearing his 1970's Canadian blazer, holding an old hockey stick and a present golf club.